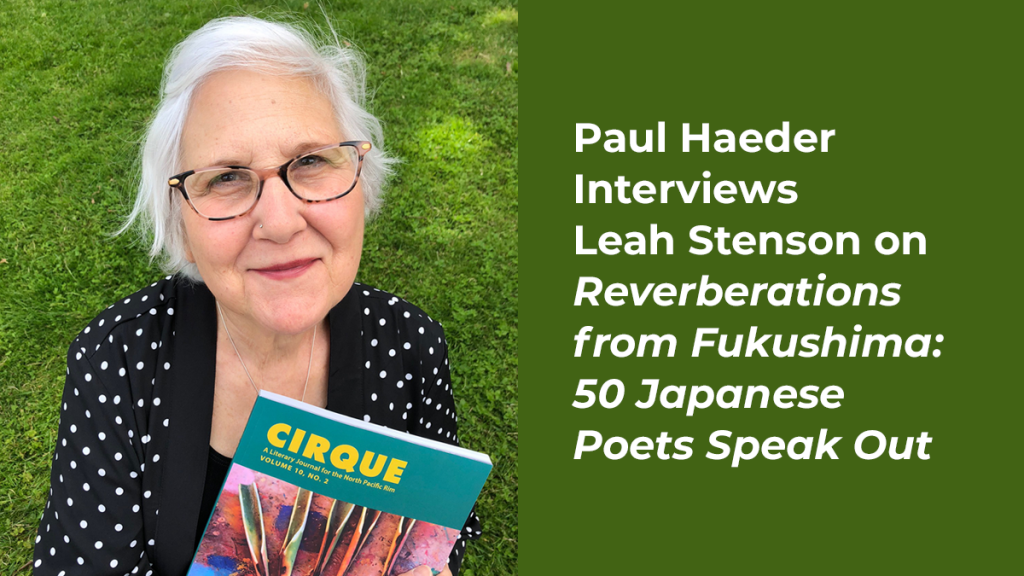 PH: Give us an elevator speech. What is this book about?

LS: The 50 poets in this anthology speak out against the nuclear industry and the dangers it poses not only to their fellow citizens but also to people everywhere who live under in the shadow of nuclear reactors. The poems—some from poets directly impacted by the Fukushima accident—offer passionate compelling testimony about the dangers of nuclear energy and the dangers of government regulatory failures and nuclear industry collusion. The book also includes essays by the editors and some Japanese activist poets and nuclear experts.

PH: Why did you choose this project?

LS: I wanted to open the eyes of American readers to the dangers inherent in uranium-based nuclear power. I wanted them to see, feel and understand—through the words of Japanese poets—the terrible consequences of nuclear power gone wrong. I also wanted to draw attention to the self-serving political and economic forces that promote nuclear power—not only in Japan but around the world. On a more personal level, I might say that the project chose me. I have a deep personal connection to Japan, having lived there for 16 years. My husband and daughter were working in Japan when the disaster occurred and I was only days away from the nuclear plume in Portland, Oregon. The Fukushima nuclear disaster was the first nuclear disaster of the 21st century, and I’m afraid it won’t be the last. If we have any hope of preventing another Fukushima, it is necessary for people to wake up to the perils inherent in nuclear energy. Sticking our heads in the sand will only pave the way for an increasingly hellish situation as nuclear power plants proliferate around the world.

PH: What is your next project to be published by Cirque Press?

LS: My next book, Life Revised, is a hybrid memoir comprised of prose, poetry and images which offers insight into the transformation of personal tragedy via the resilience of the human spirit. In the same way that Reverberations from Fukushima is a book about the reactions to an apocalyptic event shrouded in lies and deceit, Life Revised is about my personal apocalypse, all the more devastating because, like Fukushima, it was shrouded in silence and lies.