BACK TO ALL BOOKS

ALIVE AT THE CENTER:

CONTEMPORARY POEMS FROM THE PACIFIC NORTHWEST 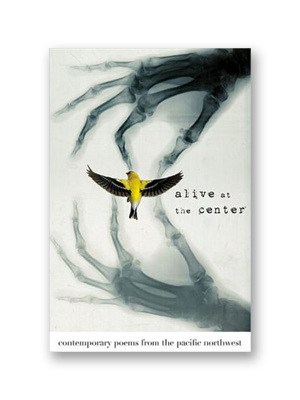 The Pacific Poetry Project’s first volume, Alive at the Center, aims to capture the thriving poetic atmosphere of the Pacific Northwest. It concentrates on the three major cities that define it—Portland, Seattle, and Vancouver B.C. This anthology, compiled and edited by an outstanding poet from each city, is a cultural conversation among the unique urban communities whose perspectives share more than just a common landscape. Alive at the Center features distinctive, contemporary poets who speak to the individual spirits of these Pacific Northwest cities.

I take along hot tub so that I can feel like a melon.

I dry myself off and tingle like a coral reef.

The lower sheet I pull up tight. I puff the pillows,

lie on my back, stretch out my arms and legs.

If I’m lucky, a breeze sweeps in sweet as silk.

The sleep is calm, like a coin at the bottom

of an old fortress wall that protrudes into the sea,

and the coin is almost green from the slow sloshing.

In the sleep, nobody comes after me, I don’t

have to go anywhere, and I am immortal.

The wings behind the man I never saw.

But often, afterward, I dreamed his lips,

Remembered the slight angle of his hips,

His feet among the tulips and the straw.

I liked the way his voice deepened as he called.

As for the words, I liked the showmanship

With which he spoke them. Behind him, distant ships

Went still, the water was smooth as his jaw—

And when I learned that he was not a man—

Bullwhip, horsewhip, unzip, I could have crawled

Through thorn and bee, the thick of hive, rosehip,

(But I was quiet, quiet

Daylight surrenders
to interior reflections
in a mottled collage
on the coach window.

My twin gazes back,
flickering as we race
through the fading
Van Gogh landscape.

Picking up speed,
we hurtle headlong
just above the track
verging on derailment.

We slam into darkness.
Plunged into silence,
I tunnel through granite,
pray for starlight.